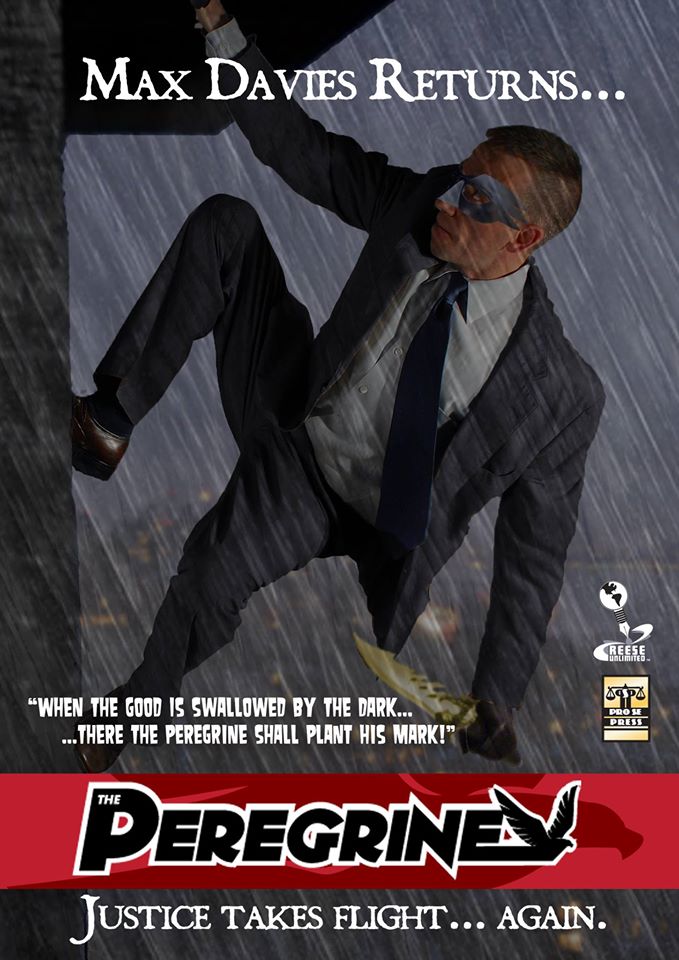 Without question, a character that has defined what New Pulp is for many since his debut in 2008 is Max Davies. Formerly known as The Rook, more recently renamed The Peregrine, Max and an entire limitless universe of heroes and adventure erupted from the mind and imagination of award winning author Barry Reese. Through six volumes of thrilling tales literally taking The Peregrine where other heroes have never been, thanks to Reese, as well as short stories by other authors featuring the masked vigilante, he remains a character dear to many fans’ heart. Now the property of Pro Se Productions, this innovative publishing company is ready for The Peregrine to soar once again in full length novel adventures.

“The Peregrine,” says Tommy Hancock, Editor in Chief of Pro Se Productions, “stands at the top of the most loved characters of the New Pulp Movement, right alongside such stalwarts as Dillon and Brother Bones. And Max isn’t alone. From stories about this one man troubled by horrific dreams and driven to don a mask and fight evil have come some of the most legendary tales and characters, all thanks to Barry Reese, the epitome of the modern day Pulp writer. With Pro Se adding Barry’s Universe to our properties, we feel its only fitting that the mask that started it all return to his own solo adventures, continuing with Volume Seven of THE PEREGRINE. And with Barry having no immediate plans to return to Max in that format, it’s only fitting that we reach out to other Pulp writers, many of which are die-hard fans of Max to help The Peregrine take wing once more.”

Pro Se Productions is currently seeking proposals from authors interested in writing THE PEREGRINE Volumes 7, 8, and 9. Each volume must be a minimum of 60,000 words and either be a novel length adventure or two thirty thousand word stories. The plan for these three new volumes is to produce Volume 7 in 2020 and potentially Volume 8 six months later and Volume 9 six months after that. The three volumes will not be published more than a year apart from the preceding volume.

Proposals should show a knowledge of the character and the universe he exists within. Interested authors may request materials from Pro Se Productions in order to build proposals.

Any authors who have not previously submitted work to Pro Se before must include a four page sample of their work. The first proposal accepted will be Volume 7, the second Volume 8, and the third Volume 9. Terms of contracts will be discussed after proposals are accepted on a per writer basis.

All proposals must be submitted to submissions@prose-press.com.